SCORPIO goes with Taurus, Cancer, and Libra (most compatible is Taurus)

Best Match For Scorpio Is Taurus

These two signs have much in common and are a compatible combination . If both signs are willing to compromise when it comes to their possessiveness and jealousy that exist in each other, they can then move forward mentally, physically and emotionally to find one of the most fulfilling relationships imaginable.

Worst Match For Scorpio Is Aries

Unless hurricanes and turmoil are enjoyed, this combination is not advisable. Both signs ruled by Mars aggressively seek power in this relationship, and being room for only one king of the household, this relationship is out of order. The only reason these signs show any compatibility is in their sexual viewpoint. So unless one is willing to step down and let the other rule, this match is not advisable.

Scorpios make wonderful partners, they are filled with intensity and passion. Love affairs are taken very seriously often causing jealousy. Their secrecy however, can make confronting problems in their romantic relationship very difficult for them.

The Scorpion person is introverted and intense. They may be cool on the surface, but underneath they are passionately intense when it comes to their emotions.

When love is grand they are very loyal and devoted mates. But they are renown for the sting in their tails when things go wrong romantically for them.

When relationships begin they are convinced that this is the one they have dreamed about as being the “perfect” one, and they will invest all their energies into the relationship.

Scorpios however, are very jealous and will sometimes work themselves up into a state of jealousy of they imagine their mate is being unfaithful. This is when Scorpios violent temper will emerge, and often with bad results.

The Scorpio Constellation in the Zodiac! 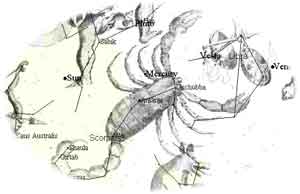 Scorpius the Scorpion, is the slayer of Orion. Sent by a jealous Artemis, Orion was stung by the Scorpion and caused his death. Orion could not be saved even by Asclepius, the god of healing. The constellation Scorpio represents the eighth zodiac sign. According to Greek mythology, Scorpio is the scorpion that Hera called in from the underworld to destroy Orion, The Hunter. Orion had been bragging to the gods that he could destroy any creature on earth. One day Phaisow, son of Apollo, took the gods’ sun chariot out for an afternoon ride. During that ride the scorpion was able to stop the horses pulling the sun chariot. The creatures reward was to be positioned in the heavens, joining Orion.

A large and important zodiacal constellation. Among many bright stars, it contains the well-known red giant, Antares, as well as many star clusters and other objects. Antares  is a reddish star and is considered the heart of the scorpion. Antares, lies in the upper right and is the brightest star to be found in Scorpius. The Milky Way is seen dimly to the left. The globular cluster just to the right of Antares is Cluster M4.

Scorpio traits, both good and bad:

Determined and forceful Emotional and intuitive Powerful and passionate Exciting and magnetic. Scorpios have magnetic and dynamic personalities. Typically they are likable and have a soothing affect on those around them. Scorpios also tend to be very creative and inventive and excel in professional careers such as medicine chemistry and physics. They tend also to be patient, courteous, loyal and generous. Those around them will often use them to help with problem resolution. Their greatest assets are the powers of will and determination.

Jealous and resentful Compulsive and obsessive Secretive and obstinate. Although patient and courteous, if they become aroused there is no fury equal to the Scorpio. They can become bitterly cutting to those around them. The more sensitive Scorpio may have a tendency to lose their composure and lash out with unconstructively. Because they may possess keen, creative minds, they may tend to day dream to extreme. Scorpios tend to have strong sexual desires that have to be controlled to avoid potential excess in this direction.

The sun sign Scorpio is one of the most powerful astrological signs in the zodiac. Dynamic and forceful, they make excelent leaders. One the list of famous Scorpio people on the left you will find several leaders. This is what they do best, lead. They are very determined and forceful, and do not accept failure as an option. It is not a good idea to get on Scorpio's bad side!

Only one thing hurt's scorpio, and that is their tendency to be emotional. However, being extremely intuitive, it helps them deal with this, and even gives them a physic edge in some situation. They live hard and love hard, and give their hearts fully and unconditionally. Woe be the one to break Scorpio's heart! There will be a price, the sting of this scorpion can be deadly!

Powerful, passionate, exciting and magnetic, these people also make some of the best sales and marketing gurus when they decide to enter this field. They also do well as stock brokers and finacial advisers because they are not afraid to question anything, and look outside the box and think creatively.

Scorpio does have a problem with jealousy sometimes, and they really do have to work on it. Most of them will require proof before actually accusing, but some will go with their instinct. Since they are so intuitive, sometimes they "know" without proof, so if you are with a Scorpio, stay true or get out, because your secret (if you have one) will not stay secret for long.

Scorpios are extremely likable and have a calming almost magical affect on those around them. Their friends and acquaintances use them as a sounding boards to help resolve quarries of all types, both interpersonal as well as physical. Scorpios personality when properly developed set them up to achieve great success. Typically persons born under Scorpio have a mind that allows them to attain the degree of self control that is essential for their progress.

Since Scorpios show a propensity for keen observation, they may also possess the ability t meditate which helps them stay focused and in control. They are keenly aware of things going on around them with very few things escaping their notice. With their exceptional will and determination they position themselves to overcome obstacles where most would just give up.

Scorpios basic vitality is strong, however wasting or abusing life’s forces are detrimental to their good health. They should avoid highly seasoned foods, allow themselves time for adequate rest and subject themselves to fresh air on a frequent basis.

They tend to be subject to ruptures, hemorrhoids and occasionally toxic diseases. If taken care of as a child, Scorpios can avoid much of the medical opportunities the plague them.

Scorpio children can be very temperamental and vindictive and their emotional extremes must be controlled in order to assure a stable foundation on which a successful adult life can be built.

Scorpios tend not to understand moderation, therefore indulging in excess where eating, drinking and smoking is concerned. By recognizing these tendencies early on and learning how to exercise moderation, they set themselves up for a happy and prosperous adult life.

Scorpios have “Green Peace” admiration for nature and can show extreme aggression in defending it. Likewise, their emotions in love matters are deep and passionate. Because of their deep devoted love, they must avoid unwarranted jealousy which may lead to many disappointments in their romantic life.

Scorpios, being highly creative are constantly thinking of ways to create, modify or improve things. That is why they tend to excel in professional careers.

Here Are Some Interesting Scorpio Facts:

You can also view your Scorpio Horoscope right here.

Scorpio Daily Horoscopes As well as this Scorpio zodiac information page, can be bookmarked and linked to your web site if you like, no need to ask permission. :)