Known to be intelligent and entertaining, these extroverts are also known to be of a trusting nature and very loyal partners. Although they do not like to show their real feelings, they are no at ease when it comes to the romantic aspects of love.

Aquarians are naturally straight forward people, but they are also very unpredictable. Difficulty in handling their emotions as well as other peoples emotions make them come across as ignoring their partners feelings and emotions. Nevertheless, they are supportive and faithful when in the right relationship.

They are very independent and do not like being tied down. With very firm views and opinions, aquarians can quickly change to obstinacy and stubbornness when riled up. Regardless of this, they are supportive and faithful when in the right relationship. When in a committed relationship, they value their "me" time, and require above average amounts of privacy.

(Read more about this on the Aquarius love page.)

Best Match For Aquarius Is Aquarius
Superlative match. This truly amazing match could not be more harmonious. They naturally understand one another. Things that would bewilder, baffle and rattle others, they are in complete understanding. These two are the torch bearer’s of human dignity. These two will have a pleasant life together. Yes, happily every after!

Worst Match For Aquarius is Taurus

Look for a shock when expecting peace and harmony in this union. With the unpredictable Aquaria, life may be too challenging for the all too easy going Taurus. Taurians conservative habits will before long get under the skin of the high strung, dynamic Aquarius. Both signs love comfort and east, but their wide divergence of views lends a problem as to how to obtain them. And as to the Aquarians unwillingness to share secrets, this will not be taken kindly to by the Taurian. Both should shop around a bit more before taking this leap.

Aquarius are known to be the spirits. They are strongly independent and despise the feeling of being tied down or held back. When provoked, their firm views and opinions quickly change to acts of stubbornness.

Aquarians are sensitive when it comes to love and will notice the slightest inattention. They are also eccentric and may become snobbish sometimes displaying no emotion and maintaining a consistently impassive front.

With marriage and or partnership problems, Aquarians would do well to study the basic qualities of those whom they choose as their life partners. Much discontent, disillusionment and heartaches can be avoided by doing so.


The Aquarius Constellation in the Zodiac! 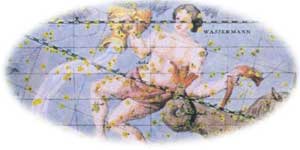 This zodiacal constellation is best known for the two bright stars Castor and Pollux, the mythical twins from which it takes its name.

Aquarius as the God of the Waters must have been regarding as a good god by some and a bad god by others, depending on the prevailing climate of their region.  To the Egyptians, Greeks, and others who lived in lands plagued by a dry climate, Aquarius surely was looked on as a kindly god who brought rain when they were most needed during the planting season.  The Babylonians looked on Aquarius as a bad god and referred to the month when the Sun was in Aquarius as the month of "the curse of rain."

One of the twelve constellations of the zodiac, lying between Capricornus and Pisces on the Sun's annual journey around the sky. One of the constellations of the Zodiacal Constellation Family. The sun passes through this constellation from mid February to mid March. Aquarius stretches from the celestial equator to the southern hemisphere. It is surrounded by Pegasus Equuleus and Delphinus at the northern border, Aquila to the west, Capricornus at the south-western border, Piscis Austrinus and Sculptor to the south, Cetus to the east and finally Pisces at the north-eastern edge.

Aquarius is one of the faintest constellations in the Zodiac. The star Sadalmelhc is in this constellation and is named “Lucky, star of the king” and is Aquarius’s alpha and brightest star. The other bright star is Sadalsuud, the beta star.

Being somewhat rebellious and eccentric they can be unpredictable and contrary in their actions. Signs of lack of tact, stubbornness, contrariness expose them as being emotionally oblivious.

The Aquarius person tends to be hard to define in personality as it frequently changes. One moment an Aquarian is expressive, interesting and active and can unexplainably become very moody and uncaring. Their serious side tends to stir to moodiness.

Aquarians, when you meet them seem to be remarkable people. They display good manners. Their charming and tend to make an overall good impression however they can also become very obstinate and self-willed.

They tend to have a great sense of adventure about them.

Aquarians tend be extremely sensitive and therefore get their feelings hurt a lot. They may show a temper ranging from hurt feelings to extreme anger although this is usually short lived.

You might say that dependent upon immediate circumstances, they are over reactive regarding temperament.

This Zodiac sign tends to have an overall propensity for good health. They have strong constitutions but must be ever vigilant in guarding against their very emotional nervous system.

They need to guard against poor eating habits and excesses of all kinds. It is important that Aquarians learn early on what tends to work for them in their diet.

It is paramount that Aquarians exercise to maintain a strong fitness level. Since this sign rules the ankles and calves, a good exercise regimen can help avoid weakness in these areas. Aquarians are fond of sports and conditioning needs to be a routine, not an occasional happenstance.

They display an ability to learn things easily. They tend to be very intuitive and even though they may forget one’s name, they will remember other details about those they meet. Internally they are satisfied just being aware of tings they know are letting it go at that.

Here Are Some Interesting Aquarius Facts:

; Ruling planets are Uranus and Saturn
; Deep Red is primary color
; Birthstone is Garnet
; Lucky day is Wednesday
; Lucky numbers are 8 and 4
; Lucky colors are pastel blue and green
; Best location for success is large cities

The constellation Aquarius represents the eleventh Zodiac sign. According to Greek mythology, various myths are associated with Aquarius such as the Egyptian God Hapi whose water jugs poured into the Nile. The Greek mythology is linked with Prometheus who stole fire from Zeus to perpetuate enlightenment. Uranus was slain then castrated by his son Cronus after being locked up in the underworld

One of the most friendliest people you will find, The Aquarius sun sign is the one you can count on to stand by your side and comfort you when you are feeling blue. They are good listeners, and care deeply for their friends. To people they are not close to however, they can be somewhat detached.

These are lively people, very inventive and enjoy being original. Aquarians always seem :out of step" with the rest of the world, this is due to their ever striving to be different. Anything goes with them, and sometimes they can be considered quite eccentric. Funny thing is aquarians are happy to be eccentric! Although it can be somewhat difficult to get close to aquarius, this sign is know as "fixed" so that means if you do succeed in getting close, they will be loyal and faithful.

Aquarius can be unpredictable

The aquarius personality tends to be chaotic and unpredictable, sometimes stubborn and rebellious even to the extremes of cranky and perverse. (this are rare negative traits). This sign, a person that is totally dedicated to being unconventional, tends to remain in a rigid unrecognizable pattern when conducting their daily life. Aquarius is also a zodiac sign that can become detached to the point of coldness, making it hard for us ordinary "mortals" to understand them. Aquarius people tend to not really care what others think of them, or the world for that matter. This is a sun sign that likes to live (sometimes) in isolation.

Aquarian's personality can be (as mentioned above) detached and impersonal, but aquarians also have a deep concern over the well being of others. A progressive reformer, this sign has lots of humanitarian ideals, but these can seem vague, causing them to earn a reputation for keeping their heads in the clouds.

You can also count on this astrological sign to be loyal and trust worthy. Very seldom if ever, will they give into temptations that would betray a loved one. The aquarius sun sign is true blue and loyal. They are one of the first to sign up to server their country, and will give their lives defending her.

They can be counted on to come up with original ideas. They make good designers and inventors as well as musicians. These intellectuals excel in the arts as well as the technical trades.

Aquarius children tend to be shy and laid back. A sharp contrast to their adult counterparts. The enjoy being alone sometimes to an extreme degree, they tend to be withdrawn and isolated. They are full of affection, with a loving and kind disposition. They are usually obedient to loved ones, and will give in for the sake of peace and harmony. Aquarius, being an intellectual sign, means these children have active minds. They can be persistent and quite helpful at times when they are needed the most.

The most negative thing about the Aquarius child is probably their tendency to worry. It is advised to keep them away from worrisome adults, as these people will cause them to worry more, and might set a bad example.

Prone sometimes to poor blood circulation, the aquarius child needs an orderly life to avoid this and other illnesses. The best thing for them is harmonious surroundings. Aquarius children are also prone to these illnesses: Blood poisoning, anemia, nervous disorders, swollen ankles and various other nerve related illnesses.

You can also view your Aquarius Horoscope right here.

Aquarius Daily Horoscopes As well as this Aquarius zodiac information page, can be bookmarked and linked to your web site if you like, no need to ask permission. :)