For the Libran falling in love comes naturally, as their fundamental instinct is to have a happy and enduring relationship. To the Libran life without love makes it hard for them to operate, they long for the feeling of being loved.

At times the Libran may become confused thinking that they have found love, when in turn it may only be infatuation. Some Librans prefer to endure a bad and unfulfilling relationship rather than setting out on their own, as they are not good loners.

With the Librans’ romantic ideals they may set themselves up with excessive mental indulgences which in turn may fall to the way-side. The Libran person must learn to heed their intuition and to guard themselves against impulsiveness in their romantic endeavors.

Librans are known charmers, they crave admiration and flattery and have an intense desire for things such as love, sympathy and understanding. They may be considered by their partners to be very hard to satisfy. Librans will often use their charm to gain help, favors and whatever else is in it for them. This will often cause problems in a serious relationship where as the flirtation be the Libran may not be appreciated by their partner.

LIBRA goes with Aquarius, Scorpio, Pisces and Leo (most compatible is Aquarius)

Best Match For Libra Is Aquarius

These two signs are most suitable in terms of marriage. Both have perfect affinities with their mutual love of society, beauty, and people. The only caution would be that the Aquarius’ mate at times for no reason may seek seclusion and shut the door to any communication. The Libran must allow Aquarius to relish in their seclusion, afterwards all is well if Libra does not insist on any explanation.

Worst Match For Libra Is Virgo

This affair most likely will not blend well. At first while sex and curiosity are stimulated, all appears well. But, when both signs come down to earth there is a slim chance the relationship will go on with any happiness when both find the others basic qualities are still in tact.

The one thing a Libran does not like is criticism. And the Virgoan loves to dish it out. Not to mention the clash between the two when it comes to perfection, where Virgo insists on it and the Libran hates detail. Conflicts in this combination are many, but if both try hard and work to understand the others pet peeves, they can find mutual grounds of respect for one another.

The Libra Constellation in the Zodiac! 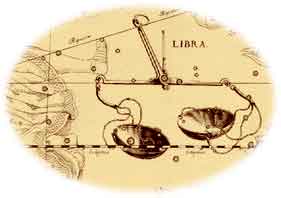 In ancient times, the stars of LIBRA, The Scales, were sometimes intermingled with those of SCORPIUS by the Greeks, but they have always been considered as a separate group by the Romans. This zodiacal constellation is associated with balance - balance of both Nature and of Justice. Some 3000 years ago, the Sun entering LIBRA marked the beginning of Autumn, when days and nights were of equal length, i.e. balanced, and Roman astrologers considered that the constellation represented the scales held by Astraeia, goddess of Justice. Libra is known as the constellation of the scales. It is believed that the name comes from the ancient Babylonians. They felt that Zibanitu ( The Scales) sat as the judge who weighed the souls of the living and the dead. In Greek mythology the Goddess Athene who puzzled her fellow gods by holding a court of justice among people. Libra demonstrates external balance by intuition. Libra sits as the fulcrum point and separates good from evil.

“To be or not to be: that is the question
-Shakespear, Hamlet

Libra can be found between Scorpius and Virgo. The position of Libra is 15 hours right ascension, -15 degrees declination. Libra is visible between latitudes 65 and -90 degrees. Libra is best seen in June at 9:00 PM.

Libra is the constellation of Venus. Antares is seen as the brightest star although Libra is best known for its two more modestly bright stars Zubenegenubi and Zubeneschamali.

Libra traits, both good and bad:

Diplomaitic and urbane Romantic and charming. Easygoing and sociable. Idealistic and peaceable Perceptive and intuitive. Very graceful and charming. Expresses considerable poise, is kind and caring with a sympathetic disposition. Librans’ are generous by nature and are loving and affectionate, and most are very talented and adaptable.

Indecisive and changeable. Gullible and easily infuenced. Flirtatious and self-indulgent. Tempermental in nature and sometimes quick to anger. Can be selfish and self willed at times. They are prone to daydream and make believe. They may tend to be flirtatious and tend to be discouraged easily. Monotony does not fare well with the Libra.

The Libran enjoys travel, sports as well as theatre. They enjoy nature, motion and have a real taste for the arts and entertainment. They are prone to engage in frivolity but are also very devoted.

Librans tend to be strong supporters of equality, the rights of man an universal brotherhood. Unfortunately they tend to be fence sitters and seldom put their feelings into practice. Librans dislike injustice and pettiness but many times fail to apply these feelings to themselves. Though subtle in appearance, Librans are selfish and self willed and resent any intrusion into their thought, independence or action. Librans rend to be very intuitive but tend to let their prejudices and feelings cloud the true issues. They tend to show good intelligence except in matters of their own feelings. Emotionally Librans tend to be impulsive and have a hard time seeing an idea or proposition through to fruition.

Librans have great imaginations and therefore may waste time daydreaming or putting themselves in imaginary roles.

Instead of confronting emotional problems honestly, Librans will settle for peace at all cost and in doing so become frustrated and bury their feelings. These frustrations can lead to many types of illnesses. Because Librans tend not to be assertive, an argument becomes overwhelming resulting in stress symptoms such as back weakness, kidney trouble and eczema.

Librans must constantly watch their weight as they may tend to turn to sweets to hide their insecurities.

Overeating can also be a sign of depression but given a strong constitution, overeating or depression should not pose any insurmountable odds.

Librans must be ever diligent in their guard against occasional spells of moodiness and depression by looking for fun experiences to divert negativity. They must avoid over-doing, nervousness and becoming irritable which inevitably leads to more serious medical conditions.

Librans Can Be Very Indecisive

The indecisiveness of Librans has tem sitting straddle a fence and waiting or from another point of view swinging wildly from one point of view to another. Since this is not very reliable behavior, they often appear two-faced and self centered. Librans tend to want things their way or not at all.

Librans Tend To Be “Just” Thinkers

Librans have great intuition which allows them to better grasp human nature.. They seem to be able to see through and understand the real motives of others. Time usually proves that a Libran’s initial gut feeling about someone or something was right. They tend to apply intuition to others, avoiding their own personal feelings and emotions.

Here Are Some Interesting Libra Facts:

You can also view your Libra Horoscope right here.

Libra Daily Horoscopes As well as this Libra zodiac information page, can be bookmarked and linked to your web site if you like, no need to ask permission. :)