PISCES goes with Taurus, Cancer, Capricorn and Pisces ( most compatible is Pisces )

Best Match For Pisces Is Pisces

With this combination you will find the same vices and values. There is also much understanding and sympathy for each other, which in turn makes getting along well together a snap. Both have the same basic interests such as home and possessions. In each other they find the refinement and delicacy that both desire when it comes to love. This is a great union.

Worst Match For Pisces Is Sagittarius

The free and light hearted Sagittarian may find Pisces a much too heavy load to carry. These two signs are great when speaking of friendships but in marriage Pisces is far too confining for the easy going Sagittarius. If boundaries can be set early on in the relationship and each try to understand the others traits, and tendencies, be them good and bad, it just might be the common ground that will allow this union to work. But, be aware that this will not come with ease.

Probably the most romantic sign of the zodiac. They are caring and sensitive and when in love they are filled with aspirations. Most are deeply sensitive and soft hearted. Although high strung they are all too happy to lose themselves in their relationships

Most Pisceans view their loved ones through rose colored glasses, and refuse to admit that their idealized mate is no more than human. Romance allows then to escape into a dream like world, but it's only in their imagination that they fantasize about being unfaithful as they really want nothing more than a spiritual life with their partner.

This sign is a sentimental one, and it tends to be swayed by emotions. Hurtful relationships often leave them scarred and their romantic ideals shattered. Pisceans are easy to get along with but are subject to moody periods which in turn makes them hard to understand. Their variety of moods may make married life hard for them.

In the emotional area, they are inwardly full of affection and easy to get along with but they produce a series of contradictions. One being that while they have a strong desire for romance, they will suddenly throw on the brakes for no apparent reason.

Pisces being gentle and sentimental may find themselves often deeply hurt by some of the more fiery signs. Pisceans will often become willing victims in a destructive relationship without even realizing it.

The Pisces Constellation in the Zodiac! 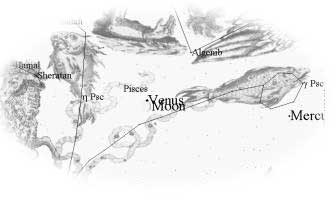 Pisces seems to be one of the oldest constellations in the sky. The ancient Syrians saw this region as representing two fishes bound by a cord, one fleeing toward the western horizon and one fleeing northward. This peculiar image was adopted by the Egyptians, who saw the fish as swimming from Set, the evil brother of Osiris. The Greeks adapted the story again - for them, one fish was Aphrodite, the other her son Eros, and both were escaping the giant Typhoon. The constellation Pisces represents the twelfth zodiac sign. According to Greek mythology, Pisces commemorates the fishes that rescued the Goddess Aphrodite and her son Eros after they jumped into the river to get away from the giant typhon. The fishes were rewarded with a place in the heavens. Their tails were tied together so they would always be together.

Despite its fame, its size, and its prominence as a zodiacal constellation, the stars of Pisces are largely disappointing. Alpha Piscium is a star otherwise known as Alrisha, 'the Cord', which represents the point where the two fishes' cords meet.

Alrisha is the not the brightest of Pisces' stars, though: that honor goes to Gamma Piscium, which lies in the westward 'fish'. This is an irregular hexagon of stars which, though dim, are recognizable by their characteristic shape. The northern fish is much less well defined, being a faint straggle of stars in the direction of Andromeda. The brightest orb in Pisces is the planet Jupiter. The “cricket” (most famous part of Pisces) brightest star is Gamma Piscium. Down and to the left of Gamma is the most famed star, Piscium. Omega is found to the left and upward toward Andromeda.

Pisces traits, both good and bad:

Imaginative and sensitive Compassionate and kind Selfless and unworldly Intuitive and sympathetic. Pisces tend to be artistic by nature, they are typically very kind and sympathetic toward others. They seem to be very intuitive, adjust to circumstances and are receptive to new thinking.

Escapist and idealistic Secretive and vague Weak-willed and easily led. Pisces may tend to be impractical, somewhat vague and careless. They can be spiteful, greedy and downright immoral. Occasionally they can appear confused and weak of will allowing them to be easily led astray.

The very imaginative and sensitive Pisces zodiac sign will be among the very best artists and story tellers there are. They can feel in depths and levels that us ordinary mortals can only imagine.

They are very loving people and are a bit more sensitive then the other zodiac signs. Be careful when dealing with the Pisces you are in love with, because absent minded comments can sometimes cut them deep.

A Pisces person will be one of the first to help you when you are down. They are charitable and honest, willing to do anything for their fellow man. They hate suffering and you will find them active in charities and other activities that help those in need.

The first is one of being very charming and pleasant to be in contact with. The other also has these characteristics, but occasionally appears very reserved or even bashful and almost seems devoid of personality.

In order to be successful the latter Pisces must put an extraordinary effort to overcome being timid and sensitive and work on presenting confident, determined and courageous.

Emotionally, Pisces are typically kind, generous and patient and may be very sensitive to what others have to say. Although, sensitive, Pisces need to avoid anger and quick temperedness to avoid upsetting the nervous system.

The Piscean, being acutely sensitive, may tend to display the symptoms of those they may be tending. They are often caught up in the moment and need to reflect on what is real versus fiction.

Pisceans must beware of addictions that may cause them to withdraw from reality by drinking or using drugs to escape things that trouble them.

Some of the ailments which plague Pisceans are foot related such as bunions, bone spurs and heal bruising/pain. Forgetfulness can also be a bane of the Piscean, even to the point of resembling some forms of insanity. Pisceans need to be keenly aware to keep reality in perspective and not allow an overdose of fiction to overwhelm them.

Pisceans Can Be Keenly Perceptive

They possess a tendency to be able to grasp numerous details of any scenario that others are prone to miss. They tend to learn very easily and for the most part, retain it. Perception and the ability to recall stored knowledge give Pisceans a leg up on excelling when their gifts are applied in a positive manner.

Their desire to learn and experience new things leads them to travel as this affords real relaxation and removes them from day to day monotony. Many shorter trips tend to be more beneficial then infrequent more extensive ones. Use travel and learning to keep things in perspective.

Here Are Some Interesting Pisces Facts:

You can also view your Pisces Horoscope right here.

Pisces Daily Horoscopes As well as this Pisces zodiac information page, can be bookmarked and linked to your web site if you like, no need to ask permission. :)